Four Walks,
and Four More
... was a gift for a friend who found my fiction too dark and hopeless. It was selected for presentation at the 2002 Western Literature Association. [more...]


URL: DancingBadger.com
your comments to me.

Dog types! Emails from the enthusiastic toes of Link.
Today: Bad dude under the truck.... [more]

Here's the short answer, attached to a series of essays in honor of my favorite family, the mustelids. [more...]

Kathy Mallory is back and so is Carol O'Connell's wonderful blend of suspense and grotesquery. After the misfire of It Happens in the Dark, it's heartening to see both of them back on track. This one, twelfth in the series, ranks right up there with the best of them: Winter House, Stone Angel, and Killing Critics [more...].

Sensitive to the charge that my response to the 2016 remake of The Magnificent Seven might be prejudiced by my affection for the original film (and Kurosawa's Seven Samurai), I've written a detailed analysis of the film's shortcomings.[more...]. 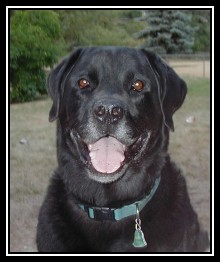