A Feast of Words

Read my full reviews of The Last Report on the Miracles at Little No Horse and The Antelope Wife.

Order them at Amazon.com [The Antelope Wife; The Last Report on the Miracles at Little No Horse]

Minnesota is turning into a hotbed of Indian writers, and Louise Erdrich is the best of them. Her milieu is the old Turtle Mountain/Pembina Reservation, which sprawled across the Red River halfway into North Dakota. Her books wind around a group of families through a half-dozen generations, and her characters appear and reappear as the landscape resolved to new definition. The books are very much like vision itself, with the play of distance and focus and light. Tales of Burning Love, which one reviewer described as a mainstream novel outside her standard venue, actually begins by introducing us to the man that June Morrissey walked away from, that fateful night in Love Medicine, and ends with Jack Mauser back 'home,' building the Bingo Palace for Lyman Lamartine. Gerry Nanapush, Erdrich's mythic remaking of Leonard Peltier, and the Lamartines all play a significant part in the action. Nanapush's wife Dot Adare, Jack's fifth wife and once the protagonist of The Beet Queen)? The nuns? What new territory? Check your notes.

Erdrich writes with a cohesive vision of a Faulkner in love with his home, with the precision of Leslie Silko, and with a feminine sensibility as sensual, strong, and thoughtful as that of Margaret Atwood; she has staked out the Pembina region (the northeast quadrant of North Dakota) as her Yoknapatawpha County. She writes with some political and moral fervor, touching on the history of injustice that is the heritage of every Indian writer as surely as slavery is for the black, but she is not above moments of magic realism, as when Jack is crushed by the marble Virgin and lives.

There is an essential difference between the sensibilities of a Margaret Atwood or a Leslie Silko and Louise Erdrich, for all the "feminine sensibility" of each. When I try to touch the difference, it slides away under me. I was about to write, "Atwood and Silko focus on Truth, Erdrich on Love." But that's not it. Atwood's books are full of hard-eyed, fierce love. I think I came upon it last night, half asleep: Atwood and Silko are predators; Erdrich is not. This is an uncomfortable comparison, because we have so many strange stereotypes about predator/prey. Who wants to be "just a deer" if you can be a lion? What's admirable about a rabbit, compared to, say, a fox? So we respect and admire Atwood/Silko for their ferocity (even if, occasionally, we wish Silko would not claw us so damned bad, and we are careful to stay out of Atwood's reach). And we are a bit patronizing about Erdrich's soft eyes and soft mouth and her stews and the blankets tucked around sad faces.

It's especially true in her later books. In one, The Antelope Wife, the theme actually emerges almost to the surface. It's not that she "owns" motherhood or wifery in some sense that Atwood/Silko do not. From what I see in The Robber Bride and what little I know about her personal biography, I suspect that Atwood was a wonderful mother. And who knows if Erdrich has been? The challenges she has faced as a wife and mother have been terrible and tragic. But her books offer comfort rather than diagnosis, forgiveness rather than judgment. That's it, I think, the essential difference that I'm tempted in my weaker moments to call love.

Despite her National Book Critics Circle Award for Love Medicine, Erdrich has not fared well with reviewers. When the expanded version of Love Medicine appeared, the twaddle-spinners at Kirkus Reviews complained that Erdrich didn't seem to know the difference between a novel and a short story collection.

One male reviewer of Tales of Burning Love found its exploration of love solemn. Solemn?! I thought immediately of the concluding moment, when the reunited lovers engage in a hysterically bawdy peanut race, up a flight of stairs, no less. I laughed out loud again, this time at the poor reviewer, so worried about who's on top... Do you really think that a book whose title inevitably recalls Elvis Presley chanting "hunka hunka ..." (and Elvis, Jack Mauser is not) could be "accidentally" funny (as Kate Moses characterizes the book in Salon)?

Perhaps Erdrich herself felt that this response needed a rejoinder. She concludes The Antelope Wife with a wonderfully silly birthday mixup almost as funny as the peanut race, and then, in The Last Report on the Miracles at Little No Horse, tops everything thus far by making the death of a grand old Ojibwe sage a rollicking farce.

The characteristic mix of humor, sex, and magic that gives Erdrich's work its particular flavor is beyond the scope of most reviewers, apparently. When The Last Report on the Miracles at Little No Horse finally appeared, after a year's anticipation, Amazon's lead reviewer lamented that Erdrich's prose is "at its worst, sadly, when she cranks up the fog machine and goes for the violins," citing a wonderfully silly (and certainly intentionally silly) description of Father Jude's sudden infatuation with Lulu Lamartine. In a novel that begins with Agnes DeWitt playing Chopin so passionately (in her brief tenure as Sister Cecilia) that her colleague nuns enact a charming and innocently naughty recreation of the disturbances in Loudon, one where an early sex scene begins, "He arranged her against the wall...", one should not be startled by the farcically incongruous.

Humor, mysticism, homely reality: They are all here, manifest in today's Indians, whose nobility resides in their ability to make their lives work. 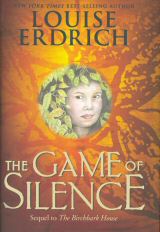 A children's book, sequel to The Birchbark House

Books and Islands in Ojibwe Country

The Crown of Columbus; with Michael Dorris

The Game of Silence

The Last Report on the Miracles at Little No Horse

I recommend reading the Love Medicine books in chronological order rather than publication order. That means beginning with Tracks, then Four Souls, Love Medicine, The Beet Queen, and The Bingo Palace. All four books are out in a matching paperback set. Then read The Last Report on the Miracles at Little No Horse. Tales of Burning Love and The Master Butcher's Singing Club link into characters of the other books.

The University of Missouri Press has published an excellent reading resource for Erdrich, Peter Beidler and Gay Barton's A Reader's Guide to the Novels of Louise Erdrich. Beidler and Barton provide catalogs of characters and incidents indispensible to anyone trying to piece together the books. You can read a summary at the UM website or buy it from Amazon.com. (In hardcover or paperback).

The February 2001 issue of The Atlantic contains an Erdrich story, "Sister Godzilla."

For a biography of Erdrich, try this page at Center for Great Plains Studies. It links to bibliographies of Erdrich's works and of scholarship as well. An excellent collection of web resources can be found at The Internet Public Library. Another good resource is The Modern American Poetry page at the University of Illinois.